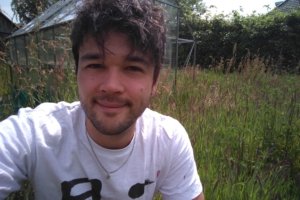 Life depends largely on chance. In the works of animation filmmaker Erik Vos, coincidence – not by coincidence – plays a major role. In his opinion, directing coincidences creates a lively and authentic representation. He achieves this by combining analogue painted images with computer-controlled images.

Erik Vos himself has two backgrounds. He has a Japanese mother and a Dutch father, who met each other by chance… Diversity is a natural inspiration for the animator, who likes to be inspired by the media itself. What are the qualities and characteristics of the various media? How can these be combined? And what can he depict and tell with it? These questions play a role through his mind in all the work he makes.

According to Erik Vos, the power of the mix is that there are at least three accidental factors. The two media (analogue and digital) plus himself, who combines these.